Thanks for letting me vent last time. Sometimes letting off a little steam is good for the soul…
And thanks also for the words of caution around grace.
I get it.
I’m fairly certain that when Jesus thinks of me He regularly prays ‘Father forgive him for he knows not what he’s doing’. I’m thankful for grace and try to extend it when I am able and aware of the need.

But speaking of venting/grace, something that’s been big in the news these days is regarding people walking around Toronto with no idea of any traffic on the streets or sidewalks around them because they are glued to their screens. The question being discussed is whether or not they should be ticketed for it. The thrust of it is that if people know they could get a ticket for it they’d be less likely to do it and therefore less likely to walk into oncoming traffic. It’s a worthy consideration. 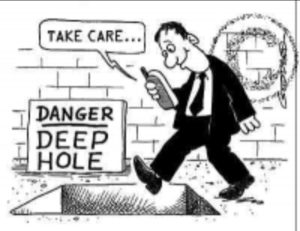 But once again, people with disabilities using wheelchairs or scooters are seemingly not part of the conversation. I can’t even remember the number of times I’ve needed to weave around people on sidewalks who had no idea I was there because of being immersed in their screens. Sometimes people literally walk right into my scooter. I’ve taken to saying to people before that happens ‘eyes up’.
Only once in a while do they swear at me for it…

Even the most liberal of politicians, which is how I lean in case there were any doubt about that, are sharing their opinions on this ticketing question without any consideration for people with disabilities.

So this is not me venting I don’t think. (well maybe just a little) It’s me trying to say from the margins;

“Don’t forget about us. We’re people too”