I had a moment this week.
A God moment.
You know; One of those mundane times when you’re not expecting anything but all of a sudden you realize something is happening.
That’s what happened to me a few days back. I was taking the bus downtown. I left the neighbourhood I’m currently staying at, which I do like (though it’s kind of hipster-ville which admittedly creeps me out at times:), scooted aboard a bus and headed towards one of our SallyAnn shelters.
As the bus passed the very touristy Yonge Street and headed into the downtown Eastside of Toronto, we headed into ‘the hood’.
I instantly found myself feeling comfortable, more relaxed;
like I was home.
No, I don’t know what it’s like to be homeless or on the streets doing any number of things that I was witnessing. I don’t know what it’s like to have been abused in my home. I don’t know what it’s like to have been cast aside by the people that were supposed to love me. But I have spent close to 30 years with this group of people and some of them are my friends.
When I got off the bus and headed towards the shelter, I recognized some folks and we said brief hellos to one another.
Again, I felt at home here.
It reminded me that there really is no place like home. And I cannot wait to get back to my own home. I’ve been away for almost a year now and it’s time.
However, as an update for those of you who have been praying and sending positive vibes our way, getting home by Christmas is no longer going to happen. Contractors and inspectors schedules just didn’t line up, as is not unusual.
But We’re very close! The windows are installed, the insulation in, the drywall is up, and the basement looks like an actual room now. 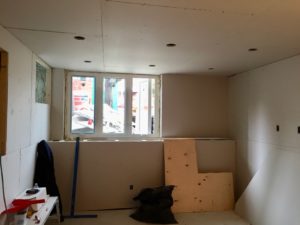 I’ll still spend Christmas and Boxing Day at home with the girls. But I’ll have to wake up here in my apartment and head over there in the mornings as opposed to sleeping and waking up there. A good friend has offered to pick me up in my mobility van on Christmas morning and run me over to the house so that I can be there early as per usual.
So it’s a bit disappointing but not terribly surprising and we’re all OK. We’re close to home and getting closer by the day.
And as I was reminded on the bus the other day,
there really is no place like home.