Well to be honest it’s been quite a bittersweet few weeks for me. I was very much looking forward to my second of four weeks of spiritual direction training. I have built some good friendships there, plus am learning so much about God, about people and about myself.
I went, and it felt great to reconnect with The people there and to start hearing more teaching again. I love to learn! 1000 lifetimes wouldn’t be enough to take it all in.
However, the week became quite tough for me too. I was reminded, perhaps the hard way, that it is called a week-intensive for a reason. The days were really packed and often went from 7:30 AM to 9:30 PM. That’s a tough day for even able-bodied people, but for me it was a real slug. I did it last time fairly well and was just assuming it would be the case again this time. However, I couldn’t get a good nights sleep. The beds were new, and were higher now than they were last time. Also the carpet had been taken out of our rooms and replaced with hardwood. Both of those changes, along with it being a very rainy week where we couldn’t go outside, plus it being that season of year when environmental services people don’t really know what temperature to set things at (which made my room sweltering hot), all were like the perfect storm, making it quite difficult for me to get a good night’s sleep to recharge my batteries.
So after close to a week I finally had to concede that I couldn’t go on any further. I packed my things and left. I didn’t even have the heart to say farewell to everyone because that would have hurt even more. (Not to worry, it won’t affect my certification a year from now as long as I keep up with the assignments)

But the beauty is, I still feel as though I learned so much. The things I learned last week were crucial to my formation. One of my favorite teachers was a Jesuit priest who came and spent a few days with us sharing about Ignatian spirituality. He was so passionate and articulate. While he was teaching, I again felt a very strong draw towards the Ignatian way of experiencing God in all of my senses. It was beautiful.
They did give us the bulk of the day off on Sunday to take Sabbath rest. And wonder of wonders, it stopped raining as well. So I took the opportunity to get outside for the first time in days and go down by Niagara Falls. I had been waiting all week for that opportunity. This Carmelite monk dude that lives in the monastery told me about a secret pathway down over the hill to the edge of the river. All I had to do was go down the road a little and look for the sign that says ‘do not enter’ and then, well, enter.
That of course is my kind of path!
So I followed his instructions and sure enough ended up down by the river.
My favorite part of the Falls is being near the river before the water goes over the edge. It feels incredibly powerful yet peaceful there. It’s also a part of the falls that we humans haven’t completely destroyed yet by making it all touristy and everything. As I’m going to take a look at the water, I’m drawn to a greenhouse kind of sanctuary looking type of place. I go in the doors and the lady at the desk, seeing me in my scooter, doesn’t charge me anything to go further and so lets me go into the area where folks need to pay for free. I wasn’t going to argue. Sometimes it pays to be disabled I guess. It wasn’t my plan to go in but, when in Rome…
I ended up in these greenhouses full of beautiful blooming colourful marigolds (at least that’s what I think they’re called). Then a little further along I ended up outside in a garden where there were all these miniature houses, some of which were built into trees forming treehouses. 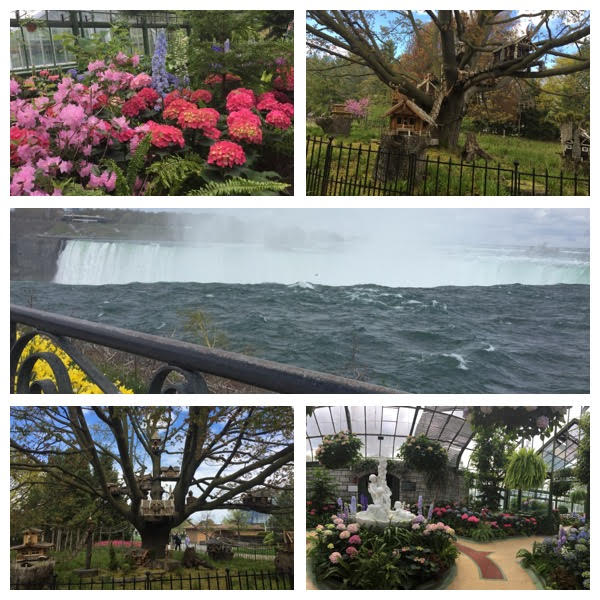 I again remembered the priest talking about the Ignatian way. I was acutely aware that God was in this place and making Herself present to me in all of my senses. The beautiful flowers, the craftsmanship in the mini houses, the smells of the plant-life, the sounds of birds, the falls rushing over the edge, the wind, the skies which were partially cloudy yet sort of blue, the warmth of the greenhouses, were all bearing down on me. I was experiencing the wonderful presence of God.

All this to say, even in the midst of struggle, or perhaps because of it, God is constantly working to make me aware of His presence.
And I, at least that day at that moment, felt like God’s beloved.