The End of an Era

I’m guessing it was around 2008 I bought it, though it was so long ago they no longer have a record of it on their files. Apparently, I just learned, they no longer even make this particular model. In scooter years, I guess one could say it was old.

I remember the day I bought it. I was working at Gateway and asked the outreach boys to drive me to the store so that we could use the van to get it downtown. I knew I’d need it not only for around town, but also for traveling purposes too. So I bought one that came apart into 5 pieces that could easily fit into the trunk of my or anyone else’s car so that I could bring it around with me wherever I went.

And boy did that come in handy. In the 8 or so years that I had this thing, I traveled all over the world with it for both work and personal reasons. What I didn’t know at the time was that it was like a tank.
It took a major lickin’ but indeed kept on tickin’.
It’s been on more planes and in the trunk of more vehicles than I’ll ever remember. Even though the occasional baggage guy wrecked it for short amounts of time, it was always fixable and kept on going.

I’ll never regret that purchase.
But there is something I do regret.

A tradition that my family has implemented is that everywhere we’ve ever traveled to we’ve bought a fridge magnet as a memento of the visit. So our fridge is now covered in ‘fridgies’ as a reminder of where we’ve been. Now that the scooter has finally given up the ghost I realize I have almost no evidence that it even existed. I wish that I had thought to begin a tradition of buying a bumper sticker everywhere I went with it and stuck it on the thing. It’s taken me up the Eiffel Tower, up close and personal to the Mona Lisa, all around Budapest and Hungary, on a train through Slovakia, up a castle in Prague, to Tampa, Orlando, D.C., Chicago, NYC, Myrtle Beach, Disney, Universal Studios, to baseball and hockey games across Canada and the US, and of course, to Newfoundland.
But even though it’s been everywhere with me, not only do I not have the bumper stickers, I barely have any photos of it. When anyone wanted to take a photo of us doing something, I always wanted to do the Facebook thing and make everyone believe that my life was without its problems. So I often did everything I could in photos to hide the fact that I needed a scooter to get around.
So when I brought it in this week to get fixed, I never dreamed it’d be the last time I’d see it. As I was driving home from dropping it off, the repair guy called me to let me know that there was just too much wrong with it to fix. He went on to say that it was so old that it had been out of production for years and there were no parts for it anywhere. So without thinking a lot about it, I decided to green light him to scrap it.

Just like that, without any chance to get emotionally prepared, my faithful friend of close to a decade was gone.

I would have at least taken a farewell photo of and/or given it a hug and a kiss goodbye first. But alas it was too late.
It was over. It was the end of an era.

When I got the chance I did look to see if there were any photos of it and sure enough I found some. I’m thankful to have found a way to remember my old friend. It was good to me. 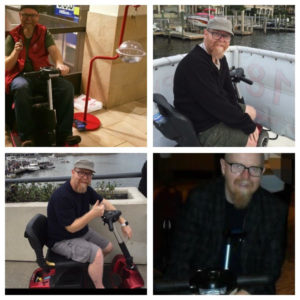 Now I have a new (used) one.
It’s a mean, lean, Canadian made scootin’ machine that I call Knight Rider. (naming credits to Jacob Buurma)
I promise you Knight Rider to treat you with the respect you deserve. Even giving you a name as opposed to always referring to you as ‘it’ will show you how much I care. 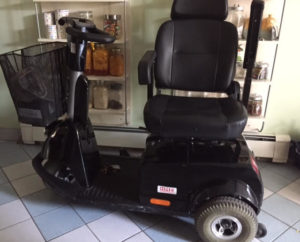