These are a few of my random COVID thoughts this past week as I have felt the tension of being both happy and angry at the same time.

1. I will start with angry. My wheelchair is broken. It has been for over a week now. One of my foot rests has broken off. Also, the legs don’t go all the way down making it impossible to do the things I need to do without someone having to put my actual legs underneath the wheelchair legs so that I can get into my elevator. I also need someone to put my actual legs down in order to eat a meal. And yes; that is frustrating for the girls, and dangerous for me.

So when the maintenance guy came in, charging me money to make an appearance of course, he proceeded to tell me that there was nothing he could do to fix it and that I would have to order a whole new leg contraption. So when I called the office to order it, they told me I needed to pay up front and that they couldn’t tell me how long it would take to get it. Then they proceeded to tell me that it will cost a few thousand dollars. And me being me of course, I couldn’t stop myself from being sarcastic and very frustrated on the phone. Not that it mattered.

And as I am completely dependent on the wheelchair, I had no choice but to pull out the old visa card and pay it with no real sense of how long it will take before I actually got the part replaced. More so than even a car, these folks know they have you by the short and curlies, so to speak. Thankfully today, I got a call saying that they will be by either on Thursday or Friday to fix it.

As frustrated as I am, I guess that’s something...

2. Speaking of angry and happy at exactly the same time, there is the conversation about homelessness. The awesome part this week is that the folks at the shelter are used to run, Gateway, helped to house a whole lot of people this week. 27 people who were living outside in an encampment got their own apartments this week. Gateway staff helped each and every one of them move into their new places. Then, 18 guys who were living in our actual shelter (I’m noticing I still use the word ‘our’ even though I haven’t worked there in years. I feel very protective over the place and still a part of the work, as distant as I am) moved into hotel rooms, making social distancing much better and safer for them as well as the guys left at Gateway. I’m so proud of Jake and his staff at Gateway. Such great work on behalf of folks with no home during this strange time.

But the part that makes me angry is seeing the pictures of the crowds at Trinity Bellwood‘s park. They seem so oblivious and uncaring of the fact that people are dying from this disease. They are, and are acting, so privileged. They all have places to go and seem to just not care about whether they start spreading this disease all over again. And none of them got tickets even though folks on the street are getting ticketed for simply sitting on a park benches too close to one another.

And they literally have no place to go.

And their encampments are being bulldozed by the city.

Then the mayor of Toronto had his picture taken in the park with his mask down over his chin talking to folks far too closely behaving as though he didn’t care as well. 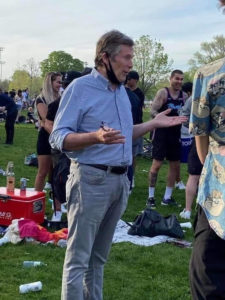 So anger, frustration and Joy are filling my spirit this week. All at the same time.

I’m going to do my best to choose joy over the others.

As hard as that is…