I find it hard to believe that I have already been here in L.A. for three weeks. Time has a way of just getting away from me. I had a wonderful time with my family while they were here. We saw a ton of stuff together that L.A. is quite famous for. And I’ve also spent many hours on my own, just sitting and looking out over the ocean and being so very thankful for the wonder of creation and the gift of simply being here.

But still, even with the beauty of creation all around me, I feel the draw of the inner city. After close to 30 years of working in downtown Toronto, like a magnet, like a narcotic almost, I am drawn to be in the midst of the ‘not so touristy’ parts of a city. It is there that I feel God’s presence the most.
So thankfully, a Salvation Army officer that I’ve known for most of my adult life is here and goes down to see his friends on the street two or three times per week. I asked him if I could tag along one day and he said yes! I was so thrilled to not only spend the day with him and hear his heart, but to also meet some of his street involved friends and hear from them as to the condition of their neighborhoods.
His job title here is ‘mission strategist’, the exact same thing as mine. So hearing his thoughts on the role was so incredibly insightful and educational for me. He has co-authored more than 20 books, so he has a thought or two to offer…

According to the Internet, more than 250,000 people experience homelessness at some point each year in Los Angeles County. 82,000 men, women, and children are homeless in Los Angeles each and every night.
That’s just not right!
However, I can see why the numbers are so high. If I had to be homeless for some reason, God forbid, I would make my way here. It’s never cold or snowy or icy like Toronto. The temperatures are moderate all year round, day and night. So if you have to live on the streets, this is the place to do it.
But I’ve now seen where Oprah, Ellen and other very rich people hang out. Even if just a few of them got together and decided they want to tap into their overwhelming resources and ensure that everyone had a roof over their heads, I think that just might do to trick. I’m pretty sure it’s not as simple as that, but it might just be.

The first neighbourhood we went to is literally called ‘skid row’. 17,000 people live in this area, with a significant number of them being homeless. There are tents everywhere along the sidewalks. It was quite shocking to be honest. I learned that every two weeks, on a specific day and time, the city comes and literally sprays down every single sidewalk to clean it up. So every tent needs to be taken up and people need to wait for their section to be cleaned, and then they can go back and set up again for another two weeks. It seems bitter/sweet to have a clean place but be dislocated while the cleaning happens… 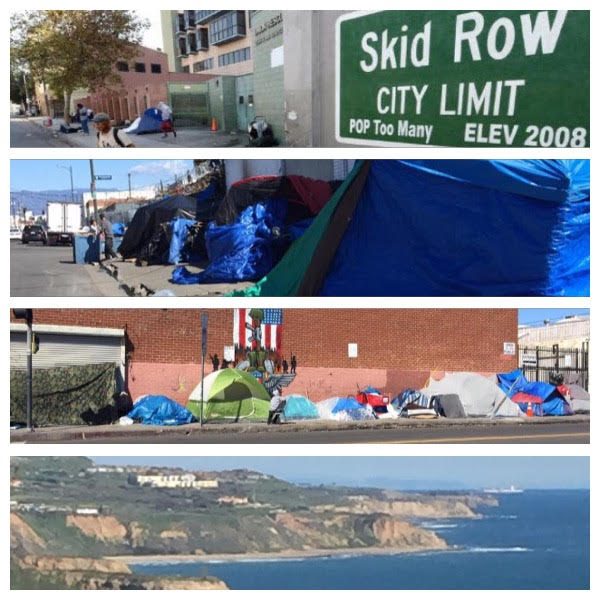 When I asked one of them where they go to the bathroom, not just for information sake but because I needed to go, I was informed that there were indeed a couple places nearby that will let you use their facilities, but mostly people just go in buckets inside their tents or behind Dumpsters.
Seriously? In an affluent city like this.
Shame.
But as is always the case in a place like this, there are glimpses of beauty in the midst of the brokenness. We chatted with a man who had chosen to live in a tent on the street with the people as a way to be incarnational, the presence of Jesus, in his Christian journey. He chatted with us for quite a while. He told us a lot about the comings and goings on skid row. As our conversation ended, he said something that was to me incredibly profound. I had heard similar sentiments before and I’ve often said similar things myself. But it was his use of language that was quite startling to me.
He said this;
“The people here aren’t starving for food.
They are not starving for money.
They are starving for hope.”
It was the word ‘starving’ that caught me. Starving means you’re dying. In this case people were not dying of hunger. People are dying, starving, because they have nothing to hope for. So he is there to demonstrate and share and pass along, as best as he knows how, his source of hope.
And he says that he has witnessed miracles, lives changed, along the way.

My hope is to be able to do just that wherever I go.

God,
Be with that man on skid row
Give him the strength he needs to keep on bringing hope
Give me the strength I need to have hope,
And to bring hope wherever I go
For as long as you give me breath
amen

I’ve run out of space. More next time.
I’m off to look out over the cliffs at the ocean, as I begin my 4th no-pants week:)