There is a ton of excitement in the city today. The big parade celebrating the accomplishments of the Toronto Raptors is happening as I write. An estimated 2 million people, now feeling like a conservative estimate, are lining the streets and in the squares so they can cheer on the championship that the players and staff of our local basketball team have accomplished.
I’m not gonna lie; I am very much caught up in the excitement of it all. Not so much as to want to be just a few kilometres away downtown in the midst of the mayhem, but I haven’t been able to take my eyes off the TV screen for far too long now. 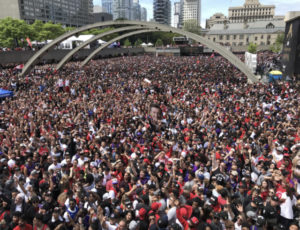 But something has been niggling at me throughout this whole journey towards the championship. There are so many sentiments about how this game has broken down barriers between people of different races and ideologies. And yes there have been glimpses of that along the way. Yet that is so far from the truth. Kawhi Leonard, who seems to be a real nice guy so this isn’t directly about him, is being offered $190M USD to stay in Toronto for the next 5 years. Yet around 8000 people who have no homes stayed in a Toronto shelter last night. The gap between the rich and the poor seems to be over growing and it seems as though many of us are in favour of that for the sake of another championship.
And the nationalism is rampant. I’m extremely thankful to be living in Canada but this whole ‘we all like each other and have no problems’ crap is driving me crazy.

In the midst of so many conflicting thoughts, I feel that all I can do is pray.

Yahweh
On this parade day, thank you that we could celebrate a victory in the sports world that makes the Toronto Raptors the world champions in basketball. Thank you that something as simple as a basketball game has been able to break down walls and barriers between provinces, races, gender, religious beliefs, and Socio economic differences. Thank you that a basketball game could bring us together; could give us a glimpse of what unity can be like.

God of Unity
We pray that we could learn from what this basketball game has shown us. We pray that we can realize that it doesn’t take complicated politics or planning to bring us together but something simple like a sport. Give us eyes to see and ears to hear possible simple ways in which we can unite our community and our world.

God of equality
I am not blinded to the reality that this unity has been short-lived. There is so very much division all around us. There is hatred and fear and violence between people of different races, religious beliefs, political ideologies, gender, and economic differences. The mudslinging has already begun leading up to our federal election. The violence continues towards our sisters and brothers who live on the streets. Women and children are still turning to the sex trade so as to be able to buy groceries and pay rent for themselves and those they love. The hatred and fear grows between people of different religions. Gender inequality rages on.
Help me not to participate in these divisive practices but rather find simple ways on our streets and in our homes to bring people together.

You love us all the same.

Give me strength and courage on this day to follow your example of what true equality and justice is all about. Help us to love one another as brothers and sisters, as your children; not just despite our differences but because of them. Help us to celebrate not just a big win in basketball but your life and love all around us.

1 thought on “We the North”