One person without a home is one too many.

May is dignity month in The Salvation Army world. Once again, we at Toronto Housing and Homeless Supports (THHS) will be doing our part by making our missional focus for the month ‘dignity and respect’.

Writing in blog format, where people have access to my stuff, is not only good therapy for me but also helps me flesh out my own thoughts on things as I go. Sometimes I have an idea kind of bouncing around in my head, and then when I go to write about it that idea becomes a bit more concrete for me. So basically, if you choose to read my writing on this blog, you’re essentially getting a glimpse into the formation of my thoughts. You’re getting a look at the inside of my head.

It’s Shrove Tuesday, aka Pancake Day, aka Mardi Gras, aka Fat Tuesday. It’s ironic to focus on ‘self-control’ on a day when we eat as many pancakes as we can possibly consume. What’s that about?

Well first off, let me talk about Shrove Tuesday. This is the day before Lent begins; a day when we choose which things we will fast from or add to our lives during Lent.

When Jesus entered Jerusalem for the last time, just a week before He was murdered, He was still very popular. The entire city stood still in anticipation of Him. Jesus could have entered triumphantly on a horse drawn chariot, accompanied by an army. He could have had His servants carry Him in. Yet again, He chose a very different approach than anyone would expect of a King.

“Your love, Lord, reaches to the Heavens. Your faithfulness to the skies” – Psalm 36:5

Faithfulness to me is about covenant. It’s about making a commitment, a promise, and sticking to it. To be faithful means to be reliable, unwavering, and consistent.
That’s hard to do.
We’ve all failed in this.
Yet God’s grace is big enough to forgive us for those times.

When I looked up the word goodness, the definition I got was this: “The state of being good”.  At first I kind of laughed; it told me absolutely nothing. Or so I thought. But when I reflected on it a little longer, I found myself focusing on ‘the state of being’ part. It does not say doing, it says being.

“Kindness is the language which the deaf can hear and the blind can see.” – Mark Twain

What kind of attitude do we do things in?

What kinds of small things can we do to show kindness?

Here’s a prayer for today to help us explore ‘kindness’ in our own hearts.

It’s easy to lose patience, often the hard part is finding it. The work that we do is hard. It’s exhausting. It can drain us of all of our resources; especially patience. Frequently we find ourselves losing patience with our co-workers, supervisors, clients, partners and friends. We get frustrated with ‘the system’ and lose any patience we might have had for it. We can even find ourselves losing patience with, well, ourselves. And I think that’s where it starts: with us. 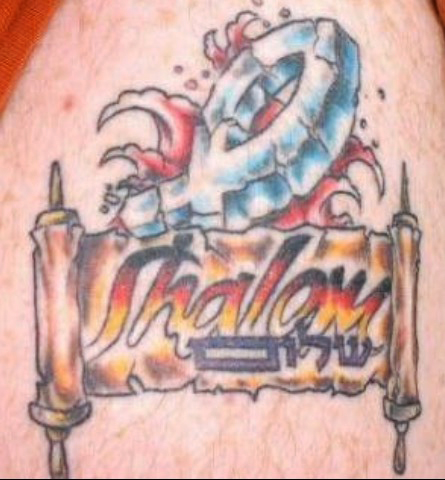 I have a tattoo on my arm (much to the chagrin of my dear mother) with the word ‘shalom’ written in both in English and Hebrew. The colours used: red, yellow, black and white represent all people of all nations. The words are written on an ancient scroll with a fish, which symbolizes Jesus, bursting out of it. It says that ‘peace’ has a name, and His name is Jesus.