The guy who was my pastor for the longest period of time in my life has died. It was a few weeks ago now but it’s taken me this long I guess to process some things. There have been a few occasions lately that have really brought him heavily to mind; especially when we were listening to some guitar music the other night. He was such a great guitar player and very diverse in his musical interests.
In the few weeks that have passed since his funeral, there are many memories that come to mind but there are four significant ones that mean so much to me.
1. My first and perhaps most significant memory of Duke was the first time we got together for breakfast. It was then that I was leaving a church and looking for something new. I had heard him preach and wanted to know more about the church and about Anglicanism. At that point in my life the most significant theological problem I was having was between reformed or Armenian theology. So over breakfast I asked him if he was a Calvinist or a Wesleyan? His answer was the perfect one for me at the time. He said that when he preaches on a passage that sounds Calvinist then he is a Calvinist and when he preaches on a passage that sounds Wesleyan then he is Wesleyan. That was the perfect answer for me at the time (though I doubt I would even think about the question or care about the answer at the moment) and it sealed the deal for me to become Anglican and a member of the church of the Resurrection. That was in 2003 or 2004 and our family have been members ever since.
2. Every morning at our church, as in most churches I would guess, there is a kids time. And as in most churches the kids seem far from interested or engaged. Duke loved to play different stringed instruments, including the sitar. One morning, Duke sat on the floor all dressed in his priestly robes, invited the kids to come sit around him, and started playing a kids song on the sitar. You could hear a pin drop. He owned those kids; not to mention everybody else in the church that day. I was completely mesmerized by his ability to capture the attention of people via the use of his music. That was an incredibly special moment for me. 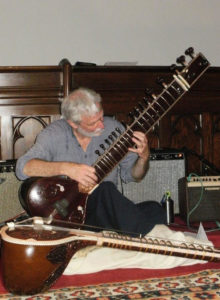 3. There was a time as part of my work that I helped to open a social purpose enterprise. It was a laundry business. I wanted to make sure that the machines in the space were dedicated to God before we ever did any laundry so as to ensure that we never forget Who was in charge of this venture. I asked Duke if there was such a thing as a laundry blessing and he said no. However, he offered to design one. I completely trusted him with that. So on the day and time that was set for the blessing, he came with his robes and a cross and proceeded to lead us through the building in a series of prayers and liturgical readings.
It was so very beautiful to me.
4. My mother-in-law was very sick in the hospital one night and it looked as though she could possibly die. (thank God she didn’t die that night and was with us for a few more years) All of the family were there. Duke came to the hospital, it was pretty late at night, and he provided some wonderful pastoral care. He listened, he prayed, was there for us, and didn’t offer any pat Christian One-liners to try and comfort us. I’ll never forget that.

Duke knew for a few months that he was going to die.
Damn cancer.
So it gave him the time to plan his funeral.
And plan it he did!
Every song, every prayer, every person involved, was planned right down to the last amen. An estimated 400 people showed up to pay their respects at his funeral. He was really loved by his community. The whole sanctuary and entire basement were filled to capacity.
Erinn, Cate and I were privileged to be a part of the very large musical group that played and sang at his funeral. That was a huge honour for me and my family.

There were a couple of significant theological and practical issues that came up during the last two or three years before Duke retired that we had very different opinions on. I fear that those put some strain on our friendship. I am sad about that.
But I know that I always had great respect for him (and I am sure he had great respect for me).
He was larger than life.
He was my pastor.
More importantly, he was my friend.
And I will always miss him.

(posted with permission from his lovely wife and my friend Deborah)

5 thoughts on “A tribute to Duke”