I have a confession to make. My teenage daughter and I like to watch bad Christian TV and laugh at the ridiculous things that so often happen there. It’s jaded I know. But we painfully watch in laughter and it’s one of the things that we enjoy doing together. In’s a bonding thing:)
One day there was a woman on that clearly had spent an enormous amount of time and money on her appearance (though we agreed that it wasn’t paying off for her). She talked about being blessed by God to have been able to buy the blue sports car she now drives. She saw it and immediately wanted it so prayed to God for a green light to buy it.
The first night she prayed for it God apparently said no.
The second night she prayed for it God also apparently said no.
The third night she prayed for it, and after learning her lesson in patience, God apparently gave her the go ahead to buy it.
She said God blessed her for her desire to be obedient. 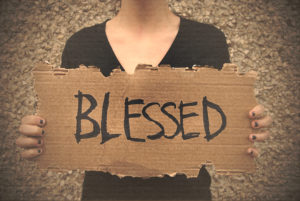 That’s an extreme example of my struggle with the word ‘blessed’ I know. But then I think of myself. I often feel really ‘blessed’ by God. I have so much to be thankful for. My family, friends, home, job, church, community, material things, the list goes on. I attribute all of those things to God. But is the right word to use ‘blessed’.

My problem with the word is that it implies to me that those who haven’t had nearly as many things in their lives to be thankful for as I do are less ‘blessed’. Does God love me more than the people I meet every day on the streets that struggle just to survive? People who have been abused from the time they were born or even earlier? People working the sex trade in order to survive? People working 3 jobs so as to put food on the table and a roof over heads? Doctors fleeing violence in their home country who now drive cabs in Toronto?

Does God love me more than them? Am I more ‘blessed? I don’t think so. In fact, my understanding of who God is implores me to believe that He loves everyone equally, as His own children.

So I wonder, is a better word for ‘blessed’ just ‘lucky’? I heard a guy speak recently who said that he had ‘won the ovarian lottery’. I loved that. He knew that his successes were not at all about his choices but more about the fact that he was born to loving parents and raised in privilege. He knew he could just as easily been born in poverty and abuse. He didn’t get to choose any of that.

Maybe there’s another word for ‘blessed’ but better than the word ‘lucky’? Or maybe blessed is the perfect word and I just need to better understand its meaning.

So for now I’ll stay hesitant in my use of the word ‘blessed’ but remain as thankful as I can be for the many ‘blessings’ in my life. And I’ll work as hard as I am able to fight for equality for everyone.