Well it’s been quite the week on the health front for me. On Monday, with Erinn’s help, I got up at 6:30 AM in order to get to an appointment at Toronto Western Hospital for 8 AM. When I got there via a subway trip across the city I learned that it had been postponed until September…
That pissed me off.
They said they sent me a letter to let me know. I was transported back to the ‘90’s when people actually opened mail. What’s wrong with a phone call? Email? I guess those things are going by the wayside too…I can’t keep up.
(But I digress.)

Then yesterday, after being told for more than five years that I needed to have my top left wisdom tooth out before it decays too much, I finally decided to get it done.

But it went very wrong. 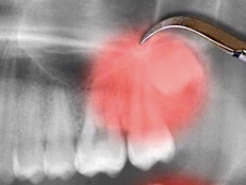 Before the procedure started the dentist told me the whole thing would take around 30 minutes from start to finish. But when we reached about the hour and a half mark, after yanking and pulling and breaking parts on my tooth off, she decided that she couldn’t get it out. My roots were stubborn and would not let go of the bone holding the tooth in place. So I have an appointment for today at 4 PM at a wisdom tooth specialty place in order to get the rest of it out. Last night I went home with part of a tooth in my mouth with shards of it sticking out and nerve endings making life no picnic. Lots of drugs took the edge off and allowed me to sleep. Thankfully.
But what a pain in the ass!!!
I just can’t seem to catch a break on the health front. Doesn’t seem fair.

I’ll check in tomorrow with an update as to how things go today.